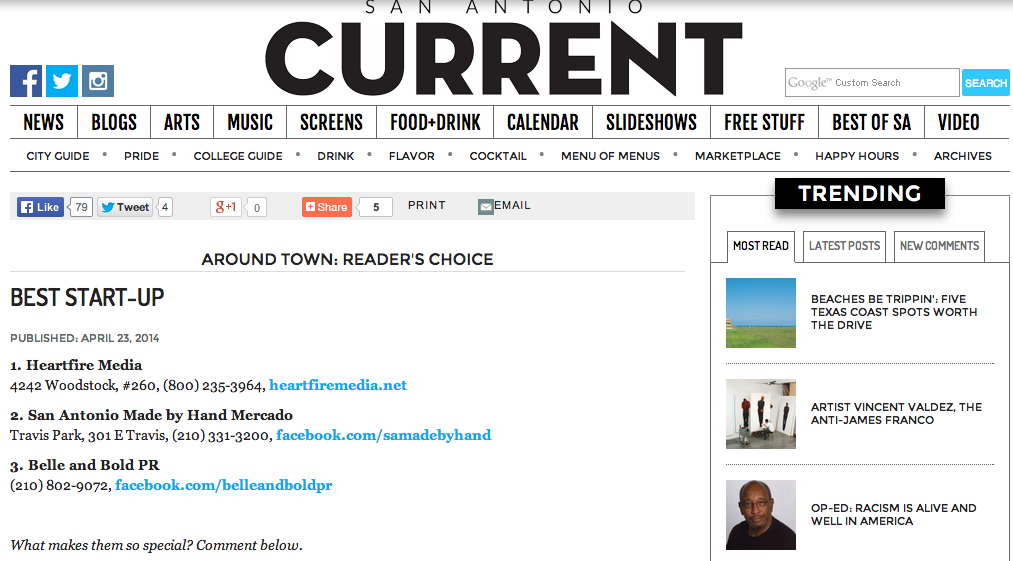 Hosted annually, the San Antonio Current’s “Best of SA” contest features winners who are chosen by the readers and critics of the publication who vote in numerous categories including best restaurant, best places to shop, best nightlife spots and more.

This year San Antonio Current Editor Callie Enlow changed the contest to get a more accurate reflection of San Antonio’s outstanding businesses and people by dividing the contest’s subcategories between readers’ picks and critics’ picks.

“Our new polling software made it much easier to prevent and eliminate cheating,” said Enlow. “We also implemented a rule that any winning business had to be headquartered in San Antonio and any winning individuals must live or work in Bexar County.”

Already making waves in the news, HeartFire Media recently released the “San Antonio is HAPPY” video that has reached nearly 9,000 views on YouTube after only five days of its release.

The video was a parody of the hit song “ Happy” by Pharrell Williams and featured many San Antonio celebrities and establishments including Nina Duran of La Prensa Newspaper, University Health System, Tejano superstar Raulito Navaira, the University of the Incarnate Word and radio host Charity McCurdy of News Radio 1200 WOAI.

The San Antonio Current will host the much-anticipated “Best of SA” party for all winners to celebrate in May and HeartFire will host its own celebratory event that will be open to the public later on in the year.

To learn more about HeartFire Media, visit www.HeartFireMedia.net or find us on Facebook, www.facebook.com/HeartFireMedia